We're almost there...
We've spent a lot of time in the Armory, but the focus for us this week has been the video and audio footage. We've been writing narrations and going into the recording studio, creating the audio for our final show, which will be coming out through spotlight speakers, which will make it sound like there are voices in your head! cool huh?

here's a sneak peek of some footage that will be on the houses. This is just my (Kristen's) section of the "home" videos:

What we've got so far... set up for our final week.

So I haven't had time to blog this past week! I've been too busy fighting through the blood, sweat, and dirt in the ceiling of the Armory. No tears though, thankfully. Things are going fairly smooth. We have the 2 big houses up and moving and motored. The motors are working, but still need a little tinkering. The walls for both of the big houses are up. The wax paper was driving me slightly insane because I couldn't repair it very easily, since the wax would not stick with the iron anymore since it was covered in dirt. Here are some pictures! 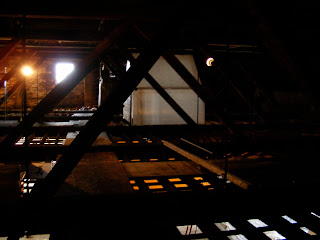 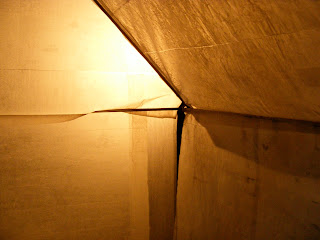 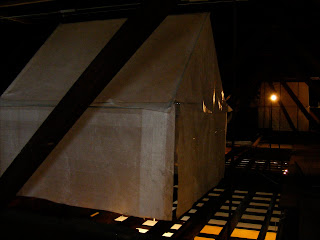 Posted by Kristen at 5:38 PM No comments:

So begins our second to last week! We're almost there.

Question(s) of the day:
-What is your favorite kind of meat?
-Knee Socks or Footies?

We finished both of the 10x10 houses, disassembled them, and brought everything over to the armory. Our team work is amazing, because we've almost got one of the houses up in the ceiling in only ONE day! We are flyin and stylin: 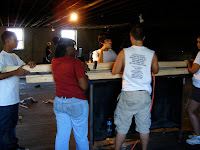 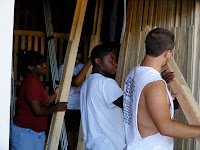 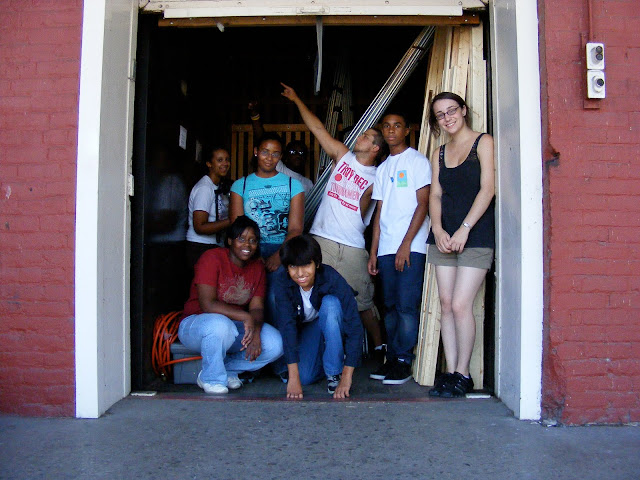 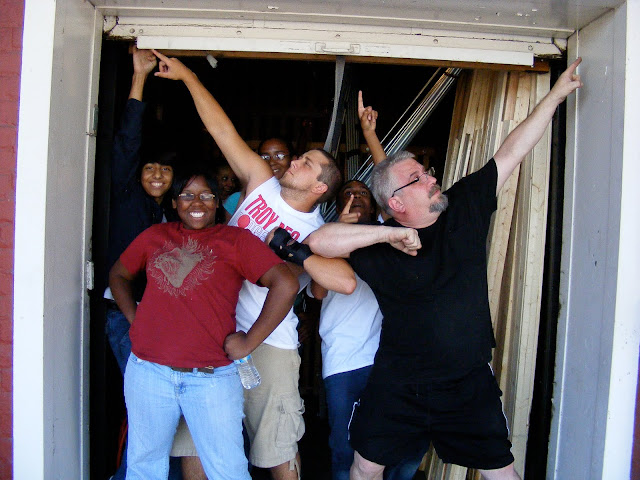 Posted by Kristen at 2:35 PM No comments:

So during Saturday and Sunday, Michael and I worked on constructing the houses and the beams for over 20 hours! We did this at Rike so that we are able to make our mistakes in the air conditioning, disassemble everything, bring it over to the Armory, and then reassemble it on the floor and put it up in the ceiling. So Michael and I did a lot of bonding. :) We went shopping, ate burritos, drank a lot of coffee, listened to Nirvana (among many other bands), sawed things, drilled things, pounded things, lifted things, etc etc.
Here's a picture of Michael waiting for the hardware store lady to figure out how to process our tax exempt form: 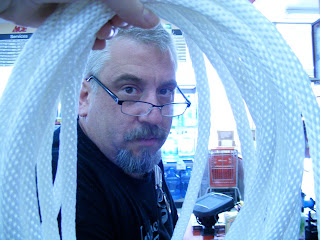 Trimming some stuff. It's pretty: 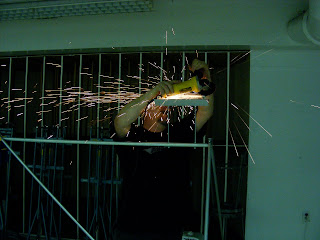 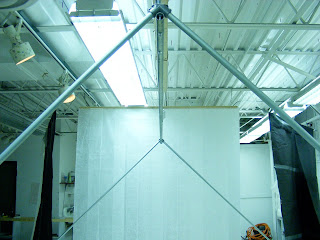 Posted by Kristen at 2:27 PM No comments:

Our Group of the Week presentation was a success!

We got a lot of great feedback and comments from our GOTW presentation on Thursday!

We spent the whole day setting things up, and it went very smoothly :)

We set up one of the houses in the other room and put on our question videos, along with the sound recording of "psychedelic" as people walked in. 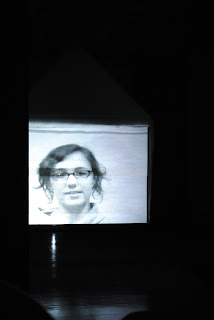 We also had projections of birds all along the walls: 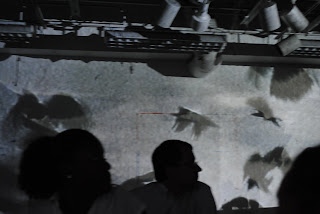 The sound stops and our "home videos" start to play on the house. Then begins a reflection narrative (written by all of us, put together and performed by nate), and I was improvising with him live on my electric violin. We were behind the wall in the other room and we were amplified and microphoned so that we could be heard and not seen. Here's a pic before the presentation doing sound check: 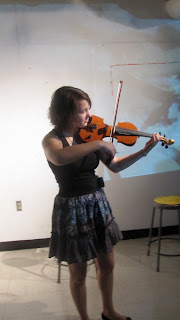 After we were finished, each of us came out through the closet door on the side of the room and talked about the following topics: Experience, Video, Audio, Maps/Model, and Construction. 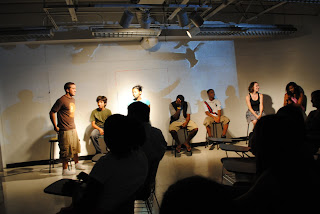 After the Question and Answer session was over, we invited everyone to go around and check out the model of the armory that we have (finally) completed! Ta-da: 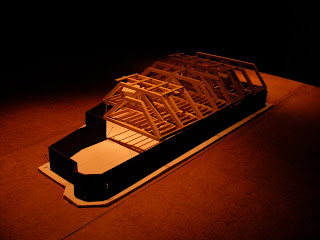 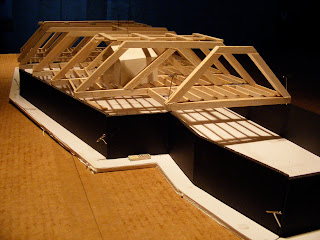 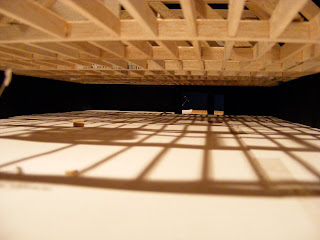 Posted by Kristen at 2:13 PM No comments:

Group of the Week Presentation!!!

Come to our Group of the Week presentation tomorrow, Thursday July 22 at 3:00 PM.
Important note: Our location is different from previous groups' presentations!
We will be in Room 206, Rike Creative Arts Building on UD's campus.
The presentation will start promptly at 3:00 and will go for about a half an hour.
See you there!
~~~~~~~
Tuesday question of the day: Carnivore or Herbivore?
Wednesday question of the day: Are we as a group controlled or operating under free will?
Posted by Kristen at 4:41 PM No comments:


Thursday Week 5
Due to the situation and certain circumstances, Tim left our group last Thursday. :(
It was a very teary farewell (for me anyway), but it was his decision. As we sat around after having just lost a member of our group, we talked about the feelings that were going through us. We were sad to see him go and frustrated at the situation. However, through our loss the 9 of us became closer than ever before. We have become stronger and we know that there is still a lot of work to do! We are intensely working each and every day.

Question of the day: What is your religion?

So begins CONSTRUCTION WEEK! Time to whip out the power tools. A face everyone should make when using a nail gun: 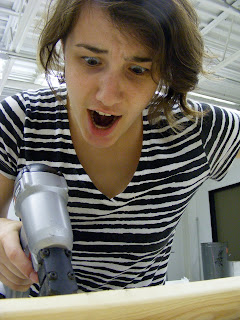 We have prepared the ceiling of the Armory for us to work in, and we have begun building our pieces. There are a lot of pieces we need.

We have one 5x5 ft. house completed, we need to build two other 10x10 ft. houses. That means.... 1000 square feet of wax paper for the walls and roofs. Nate and I wiped out Dollar General of their wax paper and then went to get more at Kroger. To make it easier on our backs and our sanity, we constructed a frame to make the walls: 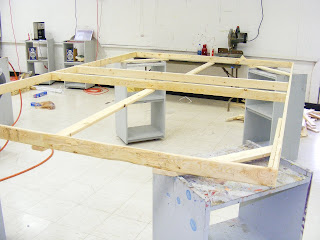 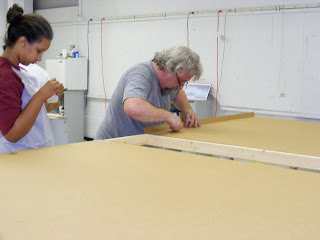 In order to hang the houses in the ceiling, we are creating boxes for the conduit to run through. 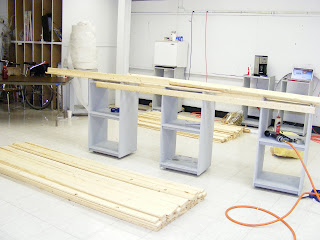 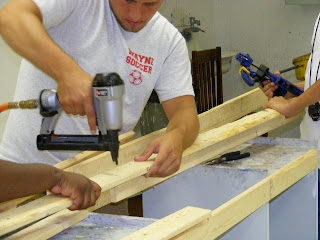 We need a lot more than shown here: 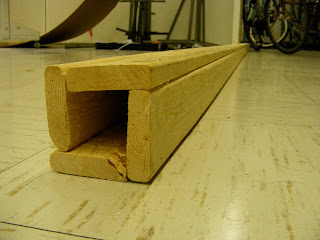 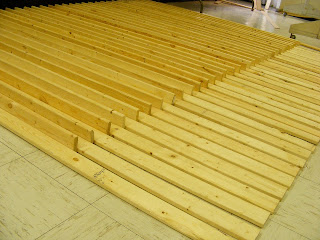 And we've also been doing even more work on the model of the Armory: 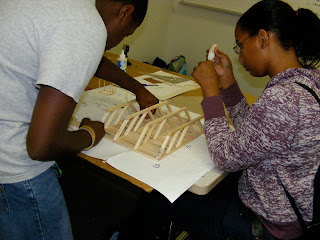 Other than all that, we are preparing for our Group of the Week presentation on Thursday! Unlike all the others, we will be presenting in Rike in one of our studios because for whatever reason, the Theater everyone else has been using is being used for something else on Thursday. :( This frustrates us a lot, but we're going to make it work.